I arrived in Norwich as an outsider, but have never felt so attached and so much affection for this fine city as I do today. Born in Exeter in 1966 of French parents, we were, just a couple of years later, to be rattling down the A11 in a rickety Renault 4 for what was meant to be a short stay on the East coast. Like many people who discover Norwich, we never left.

School was a challenge; I looked like Mowgli, ludicrously long basin haircut, olive skin, and an unpronounceable French name which my school mates seemed to translate as “long haired French git”. I was ripe for a good kicking. However, football is a great unifier and I wasn’t too bad at it. The ability to curl a tennis ball with your right foot and smash the window of the headmaster’s office from 25 yards can win you a lot of friends. It was most certainly football and being part of a team that gave me that first sense of belonging, and cemented my attachment to Norwich as being my proper home. I had the brief honour of wearing the famous yellow and green with a spell at Norwich Boys. I’d like to say that my French flair was unappreciated and that I could have been a contender, but in truth I probably wasn’t tough enough at the time. I was like a cross between David Ginola and Frank Spencer with a bit too much of the latter…. Betty.

My parents worked at the UEA and as a result had long breaks in the summer, which; combined with the much more relaxed approach to school attendance at the time, meant that we had very long holidays in Brittany. That was fine until I reached around 13 years of age when I would start to become unbelievably home-sick. I would ache to be back with my friends, mucking about in the streets of Norwich I knew so well, biking down to Eaton Park, playing pitch and putt, bowls, tennis, kicking a ball about, or just simply hanging out at the bandstand and seeing who would turn up. On the drive back from France as we approached home, I would start to pick out markers, little landmarks, a tree or a familiar house, and a wave of excitement would wash over me. It felt like I’d been away for about five years and the joy of seeing the “Welcome to Norwich” sign was uncontainable. I felt that there was absolutely no place in the world which was better than Norwich and definitely nowhere that I would rather live.

Norwich is obviously famous for its pubs and I grew to love pubs! I forced down my first ever beer, a half of brown ale, at The Lily Langtry. I can’t say I enjoyed it much but it was the only thing I felt confident of ordering in a deep voice. The Mitre pub on Earlham road became my first proper regular haunt. Jonty Young and the cool cats used to drink there and occasionally would deign to speak to us “second tier” punk rockers, but usually only to scrounge 10p for the pool table. These were the heady days of the famous Jacquard Club, the Friday night at The Gala gigs, and the underground “Cauldron” parties – clandestine all night shindigs way before the illegal raves of the 90’s. Norwich seemed to be like a little small exclusive playground; you could confidently drop in to most pubs and have a pint with someone you knew. I’m sure that youngsters still feel like that about Norwich today and it’s probably rose-tinted nostalgia but to me things seemed smaller, more intimate and the city had a unique identity which in more recent times, and like most cities, became somewhat diluted by the influx of national chains, a general cultural homogenisation, and of course Norwich’s eventual accessibility to the rest of the country, significantly London.

Geographically speaking Norwich for me has always cut the (Colman’s) mustard. When I used to have to explain to people in France where I lived, the description I had the best results with was always “It’s in the middle of the hump (la bosse) on the east next to Cambridge”. Its remoteness was and still is a big plus for me, you have to really want to come to Norwich; you don’t pass through it to get to anywhere else (unless you’re a big fan of Hemsby) and it always exceeds people’s expectations. It’s amazing how many people come to visit or study and end up staying. I love the fact that, as a city, Norwich has this “underdog” status, the perception from the outside of being a little provincial, carrot-crunching backwater, when in reality it has such an incredibly rich history and an abundance of culture and creativity. I won’t get a job on the tourist board saying this but I’m happy with this relative anonymity, it’s like when you used to love a band so much you didn’t want anyone else to discover them. It may be because of my Breton roots but I also cannot imagine not living close to the sea, and the liberating feeling this gives you, I’ve always felt mildly claustrophobic when I’ve visited mountainous, or forest regions. To be able to live in a vibrant city, with amazing restaurants, great music and theatre venues, and a top level football team whilst being 20 minutes from the coast is just such a privilege, and having a Mundesley girl as a wife, an added bonus!

So my love affair with Norwich seems to be basically based on bars, music and football, which is admirable in itself but really the truth is that it’s the friendships that these things have allowed me to forge over the years which have the deepest significance : The crazy days of Hector’s House, the first “modern” style bar of its kind in Norwich; The Last Wine Bar, such a big part of my life and now a Norwich institution; and now my current labour of love, Blue Joanna, which allows me to fulfil everything that I love about working in hospitality as well as indulging my love of music, welcoming and also performing with the great local musicians I’ve come to know over the years. And finally, although the knees have gone, I’m still involved in the beautiful game as manager of the mighty Cringleford veterans, a team which has had the honour of featuring several Norwich City legends over the years.

As we all sit at home in these unique, uncertain times we have plenty of time to contemplate and hopefully reasons to be optimistic for the future of this fine City once all this is over. Despite a country divided by Brexit, Norwich has an incredible spirit of inclusiveness, a great University whose students are incorporated into the community and social fabric of the city, a resurgence of wonderful small independent businesses all with a refreshing mutual spirit of support and co-operation, and lastly a renewed enthusiasm and passion for its local football team. Norwich has a proud history imbedded in its bricks and mortar, but it’s the people that make it so special. 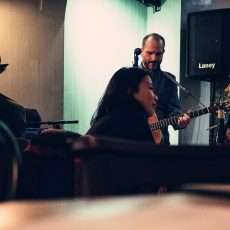 Ecky Limon
Ecky Limon has been working in hospitality in Norwich for thirty years, and is currently owner of Blue Joanna Bar and Kitchen on Unthank Road. He lives in Cringleford with his wife Rachel and has three children, Elise, Estelle and Sebastien.
Website
Facebook
PrevPreviousCovid-19: Former Norwich art student describes how life has changed in Italy
NextA lockdown love letter to Norwich: Part 2 by Nick SnellNext