Not long after I first moved into my student house, me and my mates discussed a hypothetical plan of how we’d survive a zombie apocalypse. The plague would undoubtedly run rampant through the leafy streets of The Golden Triangle, so we had to prepare. Our house would be a safe zone; it’s on a main road but has many vantage points. We could take refuge in Earlham Road Co-Op for supplies; food, alcohol, toilet-roll, handwash etc. If things got ugly, our conservatory could provide a quick escape. Our only disadvantage was being so close to a crematorium.

I’d already placed my bets on which housemate would be the one to get infected and not tell any of us until it was too late.

3 years later, visions of dystopia feel a lot more familiar and a lot less exciting. We’re all graduating and leaving education for a world in flux. Despite this, I can tolerate someone pressing pause on my future.

I’m in a privileged position to be writing this. I have a roof over my head and housemates to chat to about the good old days: the days of mooching around the Lanes or going to one of the city’s many record shops. Getting a pint or going to work. The normal stuff we did before the city centre became engulfed by the feeling of an eternal Sunday.

The city centre was the first place in Norwich I could call home. On 25th September 2016, I moved into the recently demolished Mary Chapman Court. Most will recognise it as the brutalist eyesore on Duke Street, directly opposite the Premier Inn. I’d underperformed in my A-Levels and had to settle for a Humanities Foundation course, or else be banished to another year in rural obscurity (Essex). These early experiences were an alienating departure from the creature comforts of living with my mum. It wasn’t the course I wanted, and my new abode was a far cry from UEA’s ziggurats.

This period was largely spent clubbing, buying women’s jackets in charity shops and sitting in my room writing songs – fragments of 50s/60s influenced pop which I hoped would impress my future bandmate, Sonny.

It was music which inevitably cemented my bond with the first city I’d lived in away from home. Living 5 minutes away from Norwich Arts Centre, I could see good music when I was at a loose end. I’d never lived anywhere that you could see bands without travelling.

On 7th May 2017, the NAC hosted one of my life’s most important gigs. It was Flamingods with the short-lived Organisms in support. The room was only half-full and I didn’t know anyone there.  Nonetheless, the experience was pivotal. Future comrade, Richard Shashamane was poised in the wings: camera armed and dangerous. The music itself was hypnotic yet urgent, saturated with iridescent effects and instrument changes, complimented by the warmth of NAC’s PA.

I’d gone alone and looked around the various rooms of St. Swithin’s Church. I hadn’t learned of my own connection to it yet. It seemed like a place for ‘real bands’, ones that tour and have fans. I didn’t consider that one day I’d get the opportunity to play there.

Spurred on by the gig culture I’d become so invested in, our 2-piece band, The Teddy Sunshine Affair, started up around this time. We only had two songs for our debut gig. Sandwiched between singer-songwriters and Creative Writing students’ spoken word, we made a right racket. Sonny played drum fills for about 6 minutes straight whilst I rolled round the floor of the SU bar mis-hitting every chord. The gig’s attendees politely nodded and enjoyed their pizza. It was a roaring success.

We decided our music was junkedelic and upgraded to a 3-piece, before calling ourselves Gladboy. The efforts of us and our friends were propelled by the city around us. We soon learned that Norwich’s music scene is insular and selfless. They look after their own and they’ve looked after us.

2 years and 4 days on from being stood with my arms folded at Flamingods, we played a headline at Norwich Arts Centre. The stage was adorned with inflatable canaries to celebrate promotion and it felt like things had come full circle. It was one of the best nights of my life although I got a bit swept away in the sense of occasion. I did that annoying thing where the lead singer introduces the band one-by-one during the last song. Being a 6-piece, it felt a little indulgent. It was only a stone’s throw away from a rehearsed encore.

Most importantly though, my dad DJ’d. This is where things truly came full circle. Aside from providing the bangers, it brought 3 generations of Ortons into the same space.

My grandmother, Christine Orton, was a journalist for The Guardian, The Times Education and the EDP as well as publishing various books on coping with eczema, particularly in children.

Set to the backdrop of Rock Against Racism, soon approaching the Winter of Discontent, Christine and a group of friends brought the arts forward into a newer, more integrated space through their work for Norwich Arts Centre. Previously known as Premises before changing name and moving to the trademark church in 1977, her work in both settings provided a place for live-music, theatre productions, film-screenings and the community itself. The Arts became an interactive vessel for the endeavours of myself, and many other people, over 40 years later. She was an instrumental figure driven by a radical approach to unfettered creativity and the ability to be the change she sought.

I learnt this long after my first visit to NAC, when it was still just somewhere where I went to see Ruts DC or Jeffrey Lewis. I was wrong for initially thinking it was created for ‘real bands’. Learning of my Grandmother’s work, I realised that it’s a space for the people, by the people; something any city is lucky to have.

When I spoke to dad on the phone about the move from Premises and Christine’s involvement, he explained that ‘the whole place was part of our lives’. Looking beyond the short-term memory of lockdown, it’s hard to remember whether that world ever existed before. Every reminiscence of a normal day writes another line of a faraway history book.

But the Arts Centre will feel feet on its floors again. Even though I never got to meet Christine Orton, that place has become part of my life too.

And as unreal and undead as this all feels, the zombies haven’t won yet. 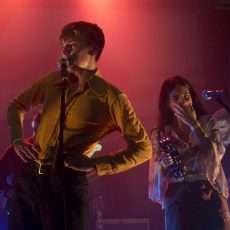