Why do I love this place? Let’s start with the architecture. Norwich is the most complete medieval city in the UK but also boasts plenty of stunning buildings spanning several centuries too. The fact that it’s so complete is nothing short of a miracle. She has survived riots, plagues, fires and wars and apart from the damage from a succession of bombing raids and attempts by successive councils to ‘modernise’, her infrastructure remains relatively intact. It’s also thanks in no small way to the sleepy river Wensum. Too slow and lazy to take part in the industrial revolution of the 18th century, so the water powered factories never came – and the buildings stayed the same.

I have to mention the location too. Just 40 minutes drive to the nearest beach and the most changeable and lengthy coastline in Britain. We are also surrounded by beautiful countryside found by country lanes with streams and bridges and expansive broads next to ancient woods. It is the place where people from less fortunate cities come to “unwind” under our big Norfolk sky.

What of the place itself? Norwich is a walkable city or if you’re in a rush, a bike will do. It has a castle, two cathedrals and is stacked to the brim with independent shops, cafes, restaurants and bars plus a market with street food, vintage and more traditional fair. It has galleries, museums, theatres, music venues, cinemas and hundreds of places to simply sit and stare. In essence, Norwich has all that one would look for in a quiet city break anywhere in Europe. It’s a place of great history,  has a story on every corner, with strong eyes on the future but with a nod to its fascinating past. It is unique, it is beautiful and put quite simply – the city of Norwich just does not aspire to be anywhere else but itself.

I can’t write this letter without a mention of my beloved Norwich Lanes. I may run the marketing now but I also spent my youth here as a young punk rocker, hanging outside the record shops and trading stories in the welcoming cafes and pubs (no change there then). This place is special – very special indeed. The Lanes are home to well over 500 independent businesses and up until lockdown, most were doing very nicely indeed. Since our Great British High Street of the Year Award in 2014 (won with a marketing budget of £128) the Lanes have gone from strength to strength. Bucking the national trend with good trading figures and very few (if any) empty shops. On top of that, our annual Summer Fayre now attracts around 15,000 people a year. This place is a village in a city, a successful one, and long may it stay that way.

To put my love for this city into perspective we have to drop back to 2011. In January of that year, after an operation in hospital, I lost the majority of my sight and returned home a broken man. As the saying goes, “you’re only as good as the people around you” and so it proved. The good people of this fine city rallied, eased me back into life and helped me on my way. With limited vision one is always vulnerable but I’ve never had to worry about the actions of others here, as the people of Norwich appear to have my back. I appreciate this more than anyone will ever know and I can only hope that in some small way, my promotion of this city is paying just a little bit back.

So we are presently in lockdown and it’s given me time to reflect. I miss my friends and my family, my neighbours and traders in the Norwich Lanes, the scent of the city as it goes about its business and the pace of the people as they go about their day. I miss the pubs and the gigs, especially at Norwich Arts Centre, I miss the parties and the laughter and everything in between.

I feel really blessed to have lived here. I’ve left this city for warmer climes on several occasions but have always been drawn back home. What would I change if I had my way? Probably close off the A140 to Ipswich. #NCFC 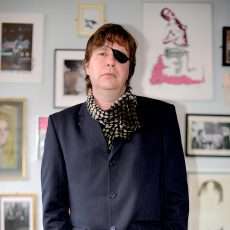