Ambition is a virtue.  Our image probably hasn’t been done much good by the fact that, over the years, Norwich has always appeared to have a lack of it. We’re an odd pond – slow and out of the way, nearly normal but not quite, ‘a bit naff’. The perfect place, it was decided, for a Partridge to spring from.

It seems to me that this is changing a little. There is plenty of hipster cool on the city’s streets these days. Great food, brilliant coffee, happy pubs, arts all over, an international market to be proud of, four dozen places to get your hair cut. To the millennial’s fresh perception, Norwich is probably something more than its traditional backwater image.

If I think about why I love this city it goes way beyond its new found Lanes cool.  In fact, in a proper sense of the word, it has always been cool.  We don’t throw open our arms to you like some of the friendlier northern cities. We back off a step and take a look.  We always want to know where you’re from. Not from any caution, more a curiosity.  The fact is in Norwich, most of us come from somewhere else as well.

It is in our DNA – we have a strong and proud history of mixing it with strangers long before the waves of 20th century immigration. Dutch Strangers wove their way into us bringing us skill and wealth and beer, even the canary itself. No wonder we loved them.

In the late 70’s the National Front saw the apparent lack of different coloured faces and called the city “The last bastion of white hope”. They didn’t reckon on us. We have stood behind the Polish, Chileans, Basque and dozens of other refugee groups over the centuries. The welcome is not necessarily warm, but it is genuine. Me stranger, you stranger. It’s kind of a dotted-line principle.

We all know people get stuck here – students mainly, but a heap of others too. I did.  I never really felt the need to be anywhere else.  Did you ever hear anyone who got stuck in Norwich complain about it?

Other places seem to be on a different clock. Call us slow if you like. I prefer unhurried. For years I have sat on London Street benches and listened for a minute to the clip-clop of people moving around the city. It is a different rhythm.

We are used to doing things on own terms.  Before big cities built their industrial power with quicker rivers, our wealth encouraged a political and commercial independence. We became disobedient, embraced debate and stole a proper march on religious tolerance.  Kett’s was the only rebellion of its time about land rights and not the bible. Later the bars and coffee houses rang with argument; the city was never shy of giving it to central government. For 100 years we’ve led the charge in decent social housing. Somewhere in our cell memory all this still lives in the spirit of the city.  In a deeply conservative county, we’ve always been ahead of a certain curve.

“Do different” we say. Because we are all different. Ok – green and yellow was a terrible idea – but it’s novel at least. And I think it’s been good for us to have been a bit naff. Because actually we don’t care. We’re cool about that too.

The lockdown has slowed us to the river’s pace and returned the city fresh.  Now the parks have struck me with their brilliance again, and there are hidden green spaces showing themselves everywhere.

Let’s face it, history aside, Norwich is a brilliant city to be stuck in. So it may be a lack of ambition, or it may just be good common sense. 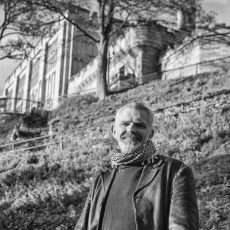