There’s no doubt our high street has taken a battering in recent years, with empty retail units and faded signage a sad homage to what once was. The allure of an online bargain is often all too much for us post-brexit, price sensitive consumers to really put our money where our mouth is.

This change in habits has seen quirky independents and big name casualties alike. It’s proven even harder for some niche businesses. It’s not only our shopping habits that have changed.

Couples prioritising house buying and education over their ‘big day’, changes in legislation which allow couples to marry in non-traditional venues and a greater proportion of weddings being second or third marriages has seen many bricks and mortar bridal stores suffer. One Norwich business bucking that trend is White Reflections.

Holly and Carol Marshall are the mother and daughter team behind the shop which celebrated its first year in business last October. The business is going from strength to strength and despite being a glamorous enclave of St Benedict’s street, their dresses and customers come from far and wide outside the city walls.

“Most of our brides travel from London and across East Anglia.” says Hollie. “We stock a lot of designers you don’t see in traditional boutiques such as Rue De Seine. They make really striking, memorable dresses and we’re only 1 of 4 stockists in the UK. If you want a certain dress, you’ll travel for it.”

It seems White Reflections can credit the relaxing of tradition and legislation changes to their growing success. Whether you’re a boho bride who dreams of barefoot nuptials in Norfolk, planning a beach wedding in Mauritius or fancy festival style fun in your own back garden, White Reflections has an extensive range of gowns who are as special and unique as the brides they’re made for. It’s also about creating an experience, something online retailers can’t do.

“We like offering appointments because it means it’s their time. Brides have two hours of the shop to themselves. They can invite their girls, have some Prosecco and try on some beautiful dresses. It makes it a bit of an occasion and it’s great fun!”

Fun it might be but what about the responsibility? There are hopes dreams (and budget depending, a whopping great price tag) attached. How do you go about helping a bride-to-be find THE dress?

“We start the consultation by getting to know them because there’s a lot of factors to consider.” says Carol. “The bride’s personality, the venue and even the season of the wedding will affect the type of dress they want. Some brides like to come in with Pinterest pictures for inspiration, others just have a clear idea of what they don’t want”

“They get a chance to handpick some dresses and then I’ll pick ones which I think will look good on them.” Hollie adds. “I always include a wildcard dress-they always prove to be the best ones because it gets them out of their comfort zone.”

Hollie and Carol are a jet-setting duo, having returned from sample shows in Barcelona, Paris, Nice and soon to be headed to New York, “cruising the world for men and dresses” Hollie jokes. They’re not just selling a dream, they’re living it!

What else sets them apart from big business boutiques and online stores? Despite being well-versed in the latest wedding fashions (Edwardian lace, oversized bows and blouson sleeves, if you’re interested), the pair eschew trends, hand picking every dress that makes it to the shop floor.

Depending on the style you go for, many White Reflections dresses are wearable beyond the big day. A comforting thought for the eco or price conscious consumer. ”Many designs you could easily where again. It’s just a case of taking the train off and you have a beautiful summer or festival dress. It’s nice to have the option to wear it again, otherwise it just gets shoved in a box” says Hollie.

It’s hard to believe anyone would dare shove items of such intricate beauty under the bed to gather dust. There’s no denying the artistry of these garments- they could easily be framed and put on the wall. Funnily enough, Carol is doing something similar featuring her own old wedding dress in the shop.

“We’re collaborating with Mia Sylivia, an eco-upcycler who uses natural dyes to give new life to vintage pieces or customise dresses post-wedding to give them a bit more personality.” Carol’s dress, which she got from Liberties in the 70’s, will be getting the Sylivia treatment ready for display in the shop as a showcase of the designers skills.

Up-cycling and sustainability may be one end of the scale but what about the other? What’s the most extravagant dress in the shop? “We’re the only people in Europe to stock this dress” says Holly, displaying a hand crafted Rue De Seine sample which comes in at a cool £4.5k.

But beauty is in the eye of the beholder and sometimes it’s not about the price tag. “This was one was featured in vogue” says Hollie excitedly brandishing a Rapunzel style dress which wouldn’t look out of place on a Glastonbury era Kate Moss. “It’s just so amazing. I would never sell it.” she laughs.

Beyond the pressure of an uncertain economy and declining marriage rate, what is the biggest challenge of running a bridal boutique? One might assume it would be bridezillas with overbearing demands and unrealistic expectations. Holly and Carol reveal more often than not it, it’s the company they keep.

Whether it’s militant mums or belligerent besties, some members of the bridal party can be fairly sharp-tongued during the big reveal. “It can be quite hard to manage those situations.” says Carol. “If it gets really nasty you just have to step in and say it’s their day, it’s their choice. That’s why it’s quite nice to have appointments when there are no more than 4 people. The more people you have the more opinions you have. You’re never going to find a dress when you have a crowd of people shouting at you!”

What about a professional opinion? Is there a right answer to does my bum look big in this? The answer, apparently, is yes. ”I always give my honest opinion because I feel I wouldn’t be doing my job right if she didn’t look amazing in the dress.” admits Hollie.

Anyone who’s ever been to a bridesmaid fitting may have experienced the pushy used-car salesman tactics  practised by some boutiques, but the White Reflections team host a pressure-free environment. “Some bridal shops will say anything to get the sale but we think it’s better if you go away and sleep on it. The right dress will stay in your head. You either love it or you don’t.”

Finally, if you wanted your customers to know one thing what would it be? Holly and Carol agree, the whole wedding dress experience should be for the bride and the bride alone. “You’re not there to please anyone else. Some brides turn to their audience before they’ve even looked in the mirror.”

“Also get out of your comfort zone a little bit. People try on certain dresses, they love them but then fear it’s “too much”. It’s your one day, you want a wow dress you’re going to remember forever.”

As wow-dresses go, you’ll be hard pushed to find another bridal boutique far or wide, online or in the high street, who could compete for eclectic and decadent styles. White Reflections is bucking the trend, driven by brides-to-be who dare to be different. 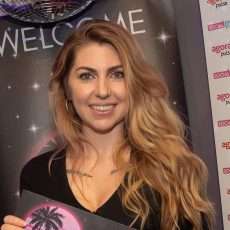 Erin Heenan
A Northerner ensnared in the East, Erin is longtime lover and resident of Norwich.
PrevPreviousThe LIFC cocktail review pt 1: The Espresso Martini at Frank’s Bar
NextAward-winning restaurant all set for pop up in city centre pubNext