Skip to content
Covid-19: Former Norwich art student describes how life has changed in Italy
Art tutor and Norwich University of the Arts alumni, Julian Hyzler, describes how coronavirus has ravaged his adopted country of Italy and what it’s like to live in the subsequent lockdown.

33 years after my time as a student at Norwich School of Art, I find myself in the, at times, frightening and quite surreal situation of lockdown.  I live in Italy and have a business running residential art holidays from my house and studio on the border of Tuscany and Umbria, a place which has been mercifully spared what the people of Bergamo and Lombardy are going through.

Our experience here has been based on various waves of response. It started in the middle of February with a general suspicion by the Italians of the Chinese which soon became suspicion of Asians in general – taxi drivers in cities not stopping to pick up anyone who looked vaguely Asian.

Still, at that point the general population here was having a hard time believing this could pass through borders and across continents, and despite the growing problem in the north this was still just a ‘winter flu’. People continued to ignore the warning signs and go out anyway. I went to Florence for the day during that period – there was no lockdown and no official restrictions, but the mood had definitely changed. Maybe it was being in a big city, or the first sight of  people in masks, or that you couldn’t buy hand sanitiser anywhere, something was very different and that beautiful city felt dangerous. The epidemic of fear spread soon after that and things began to get serious all over the country. This was the last week in February.

Italians are suspicious of authorities, and don’t like being told what to do generally, but we all began to be more careful. Although Milan is a long way away, we saw nightly news of the horrors there and there was a growing realisation that lockdown was coming. All non-essential businesses were advised, and later ordered to close down.

The first week of lockdown was novel, getting used to a weirdness you can’t really imagine. After a few days the creative ideas started to appear; live music from balconies at 6pm, virtual aperitivo with friends at 7pm, applause for the health workers at noon. Events to punctuate the day, things to look forward to and plan for which made the country sit up and get creative in a positive way. Fortunately there was no hoarding, other than a temporary shortage of flour as Italians prepared for a return to basic cooking essentials. So things were ok here, but of course there were the reports and images of hospitals in the North as a constant backdrop.

The second week has just finished here, and there have been a few changes. The death toll of hundreds of people each day took away any sense of the ‘novel experience’ and a period of increasing grimness took over. Masks weren’t seen as an indelicate social snub anymore – once a week trips to the local supermarket were both essential but also fraught with the possibility of putting yourself in the firing line. To leave the house you now need a piece of paper, an auto-certificazione, to allow you to go to the chemist, the supermarket or the hospital – filled out with all your details and your reason for being out of the house in case the police stop you. Every human interaction is still polite but very brief.

I assumed that Italians, being more social than most, and less obedient than many, would find this change almost impossible, but I was wrong. Sadly it seems to have taken our enormous number of deaths to make this happen, but it has happened, even out here in the country. We do practice social distancing, people cross the road to avoid strangers, there are no reassuring pats on the shoulder from friends. And virtually no one goes out. The cities are empty. Food now becomes the highlight and the focus of each day, as we hunker down, embattled and struggling to believe the numbers of infections posted every night at 7pm and hope for some respite for the doctors and nurses on the front line, as well as for the patients struggling to breathe and too often dying alone. And so, amongst the lucky majority with no symptoms, there is little or no resistance to any governmental restrictions. We understand the need all too well.

There are also the beginnings of a growing sense of moral injustice too. We watch the world on the one hand criticise Italy for not acting sooner, and yet we see so many other countries and their people failing to take necessary steps to prevent this, despite seeing every day in real time what we are going through right now.  It is others who don’t seem to believe this virus can pass through borders, or affect them, and they are the ones ignoring the warning signs and the advice. It seems to me that Italy had a week after the first cases appeared in the North. A week to shut everything down which to many would have seemed an overreaction at the time, but now seems the obvious step to take. In that week, many people in that affected area escaped the mess and fled  to other parts of the country and the world, and so the next spread began. But we now see that repeating elsewhere and it doesn’t make sense to us.

This has begun to turn the Italians a little inwards, and the growing sensibility I am seeing now is a sense of national pride. There has always been a delicate balance here between pragmatic cynicism and flag waving optimism, but that balance has started to shift. I am seeing more Italian flags going up, banners on peoples gates saying ‘Andrà tutto bene’ (‘It’s going to be ok’) and post after post on social media praising the fact that we are lucky enough to live in the most wonderful country in the world. The history, the people, the food, the landscape, the marvel that is Venice, the glory that is Rome, the breathtaking beauty that is Florence’s Renaissance, the wild Amalfi coast, the Tuscan hills. All of it.

Most importantly, however, the Italians are starting to see some light at the end of this very dark tunnel. The last two days have seen the hopeful beginnings of the ‘flattening of the curve’, we think. Many people will still die here, and there will be tragedy and loss and grief and a whole lot of recrimination and soul-searching and some justifiable anger, but there is now hope as well. If this is a continuing trend with fewer deaths, a lower rate of positive cases, a higher number of recovering patients, then this will have been almost precisely one month to get to this point from the point at which we began to get serious as a nation as a whole.

There has been comparatively little annoyance or anger about loss of business here, loss of travel opportunities, holidays, the economy, restaurants, cafes and bars closing and all that we are missing out on. I think people here are seeing the bigger picture. Particularly people like us who live in the country feel very grateful, almost blessed, to have space and good air around us. It is almost impossible for us to imagine life in a city environment right now. That sense of being trapped and isolated tends to creep up on you, but when you have a garden, an outside space or even a balcony, everything changes.

We saw the seriousness and the deaths in Europe first and hopefully we will be the first to get out of this as well.

After all this, I think Italy deserves that. 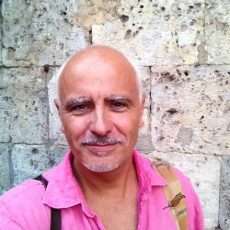