A rare collection of original punk rock posters, gig tickets and memorabilia go under the hammer at an internationally renowned auction house later this month.

The collection, which has been carefully stashed away in Norwich since the 1970s, came to light when it appeared in the Museum of Norwich as part of the Punk In The East exhibition in October 2016. Now the entire collection, which includes hundreds of items, is to be sold off by Bonhams at their prestigious auction house on New Bond Street, London, with an estimated value of £7,000. Not bad for a layout of no more than £50 back in the day.

This amazing stash is owned by Steven Ashley, Senior Finds Archaeologist at Norfolk Historic Environment Services at Gressenhall. He started collecting the tickets and posters while he was studying at Great Yarmouth College of Art and Design as he and his friends went to as many gigs as possible both locally and nationally, in a three-year period between 1976 and 1979. Ironically, Steven’s portfolio from the college is the reason why the majority of items for sale are in near mint condition.

Auction highlights include official Sex Pistols promo posters – Anarchy In The UK (£600 – 800), God Save The Queen (£500 -700) and Pretty Vacant (£350 – 400). Alongside them are a whole host of rare prints from The Clash, The Damned and Joy Division to name but a few, plus stacks of rare fanzines, badges and other ephemera. Most of the posters came from Ace Records in Norwich, which closed its doors many years ago.

Other pieces of local interest include, a ticket stub for the Sex Pistols in the summer of 1976 at Norfolk’s West Runton Pavilion and a poster for The Damned in the same year at Keswick Hall, Norwich, then part of the University of East Anglia (UEA). Many of the fanzines are from Norwich and Norfolk too and give a fascinating insight into the early days of Punk Rock and its part in local social history.

Steven said, “I’m incredibly fond of my collection and love the memories that it gives me, but now it’s been digitalised and is viewable on the Punk In The East website, I feel it’s time to let it go”.

A proportion of the money from the sale will be given to Punk In The East to help maintain the website.

The Steven Ashley Collection goes under the hammer at Bonhams on Wednesday 12th June (1pm) in the Entertainment Memorabilia Auction (lots 71-80). https://www.bonhams.com/auctions/25431/ .

As well as bidding in person at the auction, it’s also possible to bid by phone or online. Interested parties are urged to open an account in advance of the sale. 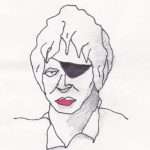