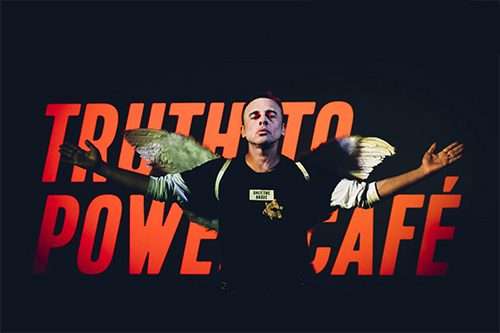 “The revolutionary potential of theatre at its best and most direct” – Lyn Gardner, Guardian

TRUTH TO POWER CAFÉ IS A NEW INTERNATIONAL PERFORMANCE EVENT MIXING MEMOIR, IMAGE, POETRY, MUSIC, AND LIVE AND SPONTANEOUS TESTIMONY FROM PARTICIPANTS SPEAKING TRUTH TO POWER IN RESPONSE TO THE QUESTION ‘WHO HAS POWER OVER YOU AND WHAT DO YOU WANT TO SAY TO THEM?’

Participants of all beliefs, and backgrounds can take part in the event and will have up to five minutes to respond to the question before a live audience.

Is it to your parents, a sibling, politician, lover, landlord, neighbour, religious leader, boss, banker, or simply your best friend?
It’s time to tell them the truth before it’s too late.

Truth to Power Café is inspired by the political and philosophical beliefs of Nobel prize winning playwright Harold Pinter and his Hackney Gang. The Gang included Jeremy Goldstein’s late father Mick, and poet polymath Henry Woolf, who at 89 is the last surviving member of the Gang, and whose poetry Jeremy performs in the show as the real-life son of the Hackney Gang.

Participants are cast in advance and will be drawn from the radical imaginations, institutions and residents from within the many and varied communities of Norwich.  To take part sign up HERE